On Molten Sand, Anger Beyond Words, and Who Would Jesus Bomb?

This evil post I have no words to describe showed up on my Facebook feed this morning: 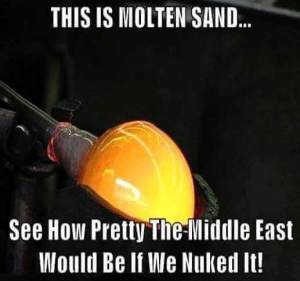 And I am angry beyond words.

It isn’t the first time I’ve heard this. And it probably won’t be the last.

That is what a human body looks like after being nuked.

Imagine, for just a moment, that this man is someone you love. Can you do it? I can. It is too easy for me. Way too easy.

I’m grasping to find the words for the horror and anger and despair I feel that anyone could ever claim that this is right. Ever. For any reason. We are taking about human lives here. We are talking about people I love.

I know that the people who like and share such despicable and cowardly “solutions” don’t care. Maybe someone will listen to my little story.

See, the legacies of nuclear weapons are close to me. I’ve seen many sides of this. My grandparents worked at The Lab. The tiny bit of money I inherited that I’m using to go to school? It came from my grandma. Who was a mathematician in Los Alamos. Her and grandpa were both a bit too young to have been there in the 1940’s; they were Cold War era researchers. Some of grandpa’s work is now declassified and available online. I grew up putting my hands on replicas of Little Man and Fat Boy at the Bradbury Science Museum every time I went to visit my grandparents. At one point the museum was remodeled and it was discovered that one of the bombs wasn’t a replica after all. I spent my childhood with my hands touching an A-Bomb. I’ve seen the Trinity Site. I’ve lived under the airspace used for training flights for bombers. I follow the news in my local paper on local waste disposal facilities.

I also spent much of my childhood in a town (Durango, CO) where uranium tailings had been left piled in mounds by the river. Where uranium waste was used as fill dirt in residential neighborhood roads, under schools, around the city swimming pool. Every day on my way to school I went past a mountain of uranium waste. There wasn’t even a tarp over it. When the wind blew it dusted the town in radioactive waste. By middle school I knew kids dying of rare leukemia. In high school we were all lent Geiger counters to go check our school grounds for radiation. It wasn’t hard to find.

I am trying so hard to learn to love my enemies. I know Jesus, who taught this thing about loving God, neighbors, and enemies, would never advocate dropping any kind of bomb on anybody. But today I have no idea how to love someone who tries to claim turning continents into sheets of glass is pretty. I know hate and anger will only poison me. But right now, “friends” who liked that awful meme, people I’ve heard say this over the last year, I have something to tell you: You are talking about my friends. And when you threaten my friends you threaten me.

I stand with the world. My God crosses the borders of nations and the boundaries of religions. My God is not confined to one Holy Book. My God created all human beings “in His own image.”

Let me be really honest. I am ashamed to be associated with people who support such violence and evil. I am ashamed that I have heard those words before and kept silent so that this is the first time I write about it. I struggle to find the words to say what must be said here. I feel very small and powerless and weak. My words are but a tiny whisper against a hurricane of hate and evil. 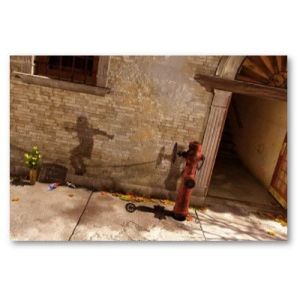 My ego wants to think I'm a writer but my heart knows I'm just another one of God's Kids who sometimes has words to say. 2 human kids and 3 feline kids call me Mom. Or Mooooooom. Or mewom, depending which you ask. I'm kinda-sorta busy being a student again; this time I signed myself up for a bizarre torture known as Graduate School. Theoretically in 4ish years I'll have earned some more nice letters to put with my name. Let's face it, I'm addicted to learning and probably need rehab to restore me to sanity and remove the obsession to read books. I don't remember what free time is but I think I like to spend it sleeping or playing in the mud on a river bank.
View all posts by m →
This entry was posted in non-violence, personal essay, writing and tagged anger, god, hate, love, nuclear weapons, peace, radiation, war, who would Jesus bomb?. Bookmark the permalink.

1 Response to On Molten Sand, Anger Beyond Words, and Who Would Jesus Bomb?